After a long gestation, we're happy to announce that the Gisborne Photo News is now available online.

Along with the Nelson Photo News, digitised previously and also available online, there are now almost 30,000 pages worth of material from the 1950s to 1970s featuring everyday New Zealanders in almost a quarter of a million photographs.

This makes the Photo News one of the largest New Zealand cultural heritage collections available online, and important in its depiction of everyday people and events.

Looking at various statistics regarding the Gisborne Photo News, some of the more notable ones are as follows:

These names have been marked-up using TEI and keyed such that we can provide an index of personal names to allow the user to quickly find all mentions of a particular name.

The total number of names mentioned is 153,171. This includes recognisable personal names (both keyed and unkeyed) that are found in the text and photograph captions. Of course, there are many more unnamed people featured in the photographs, so the number of people appearing in the Gisborne Photo News, both in photographs and mentioned in the text is much higher than this.

The above illustration shows a typical personal names index page, where all keyed personal names appear. Clicking on any of the names will show a page featuring links to all pages that feature this person.

All personal names, both keyed and unkeyed, are also retrievable via the search function.

Doing some investigation into the personal names that appear most frequently, unsurprisingly many of the top-ranked names are those of the people connected with the production of the Photo News, including Lloyd Cornish (wedding photographer), John Logan (an editor, and son of Robert Logan, the founder) and Frank Wynne-Jones (a correspondent).

When we look at those not connected with the production of the Photo News, the most frequent names are unsurprisingly public figures, including Harry Barker (a mayor), Esme Tombleson (an M.P.), Ian Kirkpatrick (an All Black) and Joan Coates (a Miss New Zealand).

Part of the appeal of Gisborne Photo News to those not connected to the region include its depiction of widely-known celebrities and events, including those above (Selwyn Toogood, Dinah Lee, Ray Columbus, a member of the Pretty Things, the Howard Morrison trio, and Mr Lee Grant).

Many of the important events and developments of the time were captured in the Photo News, including natural disasters and Royal tours. 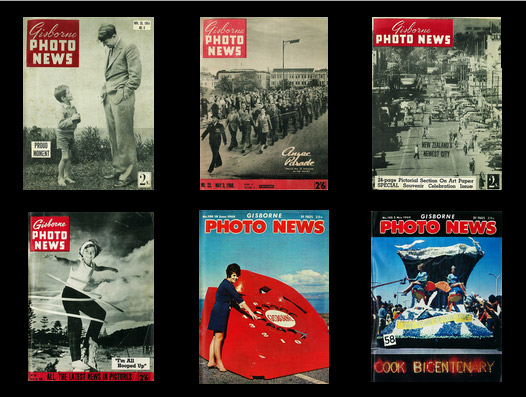 The selection of covers above include some of my personal favourites, such as Edmund Hilary, the veteran-filled Anzac parade (once a regular of any Anazc Day commemoration), the celebration of Gisborne achieving cityhood, the hula hoop craze, and the Captain Cook Bicentenary celebrations.

The hula-hoop cover in particular is a nice example of some of the quality of the photography of the Photo News, with this image achieving a dramatic effect with the use of well-placed flash against a moody sky.

The production of the Photo News

During the launch, a number of people related stories regarding the Gisborne Photo News. It was the brainchild of Robert Logan, a journalist who unsuccessfully tried the same concept in the smaller town Rangiora (in New Zealand's South Island) before decamping to Gisborne.

Having arrived in Gisborne, Robert Logan set about creating much of the techniques and equipment that would be needed for the Photo News. A corrugated iron water tank was cut down and adapted as a centrifuge to evenly spread the (hand-mixed) photographic emulsion over the plates. These plates were then apparently hung out to dry (overnight) before being used.

Other equipment handmade by Robert Logan included a three-knife cutting station and centre-stapling mechanism, and the Photo News became known for innovative printing techniques, particularly the introduction of photo-lithographic full-colour covers. The Photo News was probably the first publication in New Zealand (and possibly the world) which featured full-colour covers, and it was many years before other New Zealand magazine publishers were able to produce similar results.

Production of the Photo News involved the entire Logan family, aided by a range of photographers, correspondents, and other production staff.

As Cocoon is Java-based, we use Apache Tomcat as the backend webserver, hosting the Cocoon application, while Apache webserver is used as the front-end caching server. Although other applications such as Varnish exist to provide server-side caching solutions, we've found this combination of Apache Tomcat and Apache web-server works very well and is very scalable.

The Gisborne Photo News is a full-text digitisation project, with all text in the magazines being captured and marked-up using TEI XML. This allows the Photo News to be presented online, but also allows for repurposing into other formats in future as requirements emerge.

A question from one of the publishers that we work with got me thinking about eBook pricing, and I realised that the conversation about pricing seems to have become a bit quieter that

Note: I've made some changes to this post as a result of the build mechanism for epubcheck-3.0-RC-1 moving to using Apache Maven. More details can be found in our current repository on